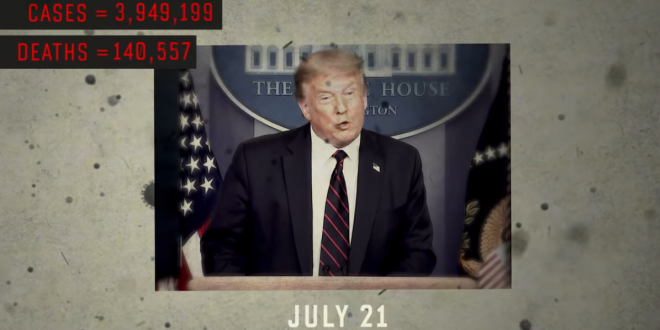 Via press release from the Lincoln Project:

As new daily cases continue to rise to double what they were in April, President Trump offered little guidance and support during his Tuesday briefing.

“President Trump is incapable of handling the multiple crises we face. Because of his failures, America, a country with 5% of the world’s population, has 25% of the world’s new coronavirus cases,” said Reed Galen, co-founder of The Lincoln Project. He continued, “We need a president who is ready and able to lead America.”

At yesterday’s briefing, President Trump said of the growing crisis, “that’s the way it is.” But Americans know this isn’t how it has to be. In fact, a new Washington Post/ABC News poll released over the weekend shows that voters would trust Joe Biden to handle the coronavirus crisis over Donald Trump by an astonishing 20-point margin.