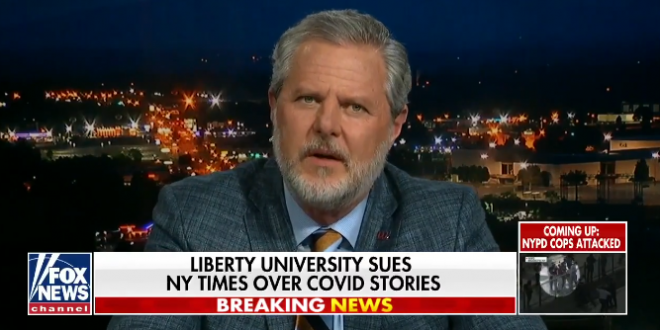 Virginia’s conservative Liberty University today filed a $10 million defamation suit against the embattled New York Times for a “made up” and damaging story that falsely charged that students returning from spring break became infected with the coronavirus because the school stayed open.

Filed in Virginia’s Lynchburg Circuit Court, the 49-year-old school also charged that New York Times reporter Elizabeth Williamson and photographer Julia Rendleman ignored “No Trespassing” signs to tour the campus at a time when the school was trying to keep outsiders, who could potentially be infected with COVID-19, away.

In a statement Wednesday evening, Eileen Murphy, the Times‘ senior vice president of corporate communications, shrugged off the suit. She told Secrets, “We are confident that our story accurately portrayed the reopening of Liberty University and the public health concerns that the reopening raised. We look forward to defending our work in court.”

Liberty University president Jerry Falwell Jr. joined “Hannity” Wednesday to explain why the school filed a $10 million defamation lawsuit against The New York Times over its coverage of the university’s response to the coronavirus pandemic.

“Not only are they a bigoted bunch of liars, and also [a] BuzzFeed type click bait publication now,” Falwell told host Sean Hannity. “But they’re also stupid, because they came on campus. We had 25, at least, ‘No Trespassing’ signs everywhere, and they were dumb enough to take pictures of the signs and publish them.

“So we got warrants out for their arrest and they had to cut a deal with a local prosecutor to keep from going to jail,” Falwell added. “That’s how dumb they are.”

Today @LibertyU sued @nytimes because they came to our campus from actual virus hotspots and made up completely false claims about COVID-19 cases at Liberty.

In fact we finished the school year without a single reported case of COVID-19 on campus.