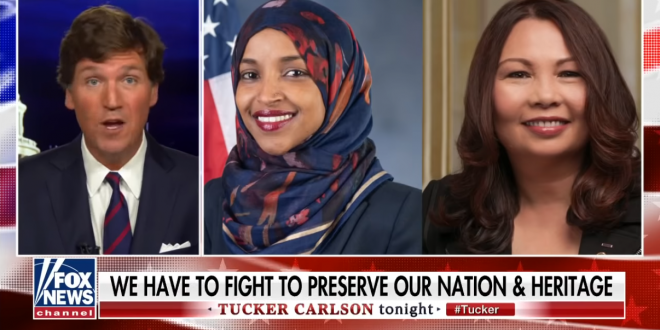 “We wanted to have an exchange with Tammy Duckworth tonight. So we called her office and we invited her on the show. Her flack informed us that before even considering our request, we must first issue a public apology for criticizing Tammy Duckworth.

“In other words, I will not debate you until first you admit you’re completely wrong. Keep in mind, Tammy Duckworth is not a child, at least not technically. She is a sitting United States senator who is often described as a hero.

“Yet Duckworth is too afraid to defend her own statements on a cable TV show. What a coward. Tammy Duckworth is also a fraud.

“This is the person lecturing the rest of us about her moral authority as a veteran. Spare us. Tammy Duckworth is a callous hack who ignored the suffering of actual veterans when it actually mattered.

“She has no moral authority. She is just a politician like the rest of them. She works for us. This is a democracy. She has an obligation to explain herself and answer our question.

“And our first question would be how can you lead a country you despise? And that’s not something we would ask only to Tammy Duckworth, by the way. Hating America is a major theme in the Democratic Party right now. It’s everywhere. Turn on the TV.” – Tucker Carlson, last night.

Fox has turned off comments on the clip below.

Omar’s quote not remotely controversial (“We must begin the work of dismantling the whole system of oppression wherever we find it.”) But it is in right wing media world bc there’s already so much built in to “Muslims are planning a sharia law coup” genrehttps://t.co/oDR7SpfWyb