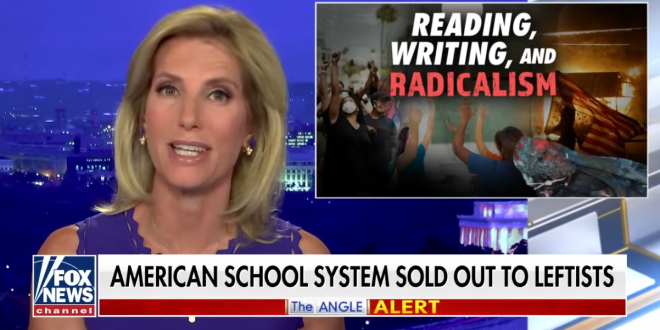 “Every subject, every extracurricular activity will be perverted to turn your kids into mini-Ilhan Omars. They’re gonna learn that capitalism is racist, history as conventionally taught is racist, literature, most of that’s racist, patriotic songs, racist.

“And the Declaration and the Constitution? Of course, they’re racist. Are you sensing a theme here? Well, say goodbye to the three ‘R’s’ — reading, writing and arithmetic, and say hello to the three ‘C-s’ — of critical race theory, cancel culture, and community organizing.

“And what about teachers or administrators? What about those people who don’t really agree with this, and either tacitly or explicitly resist?

“Well, they’re going to be driven out. Maybe they will be found guilty in newly formed race tribunals, which some students want in colleges.” – Laura Ingraham, on last night’s show.

As many have noted this week, Donald Trump is the king of “cancel culture” as he has called for boycotts, firings, and canceled shows literally hundreds of times.