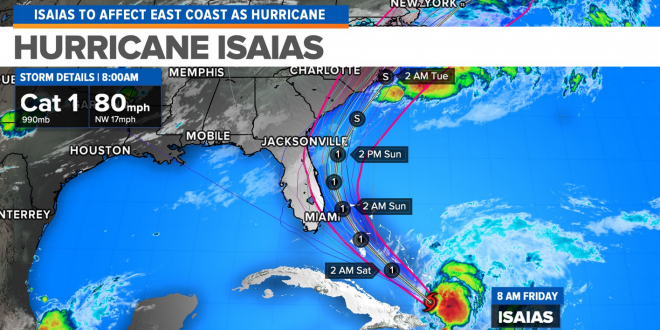 Isaias is now a hurricane and the Bahamas are bracing as the storm bears down en route toward Florida and the U.S. East Coast. As of 8 a.m., the storm had maximum sustained winds of 80 mph and was centered about 15 miles northwest of Great Inagua Island in the Bahamas. It was moving at 17 mph, and its center was forecast to be near the central Bahamas late Friday and move near or over the northwest Bahamas and near South Florida on Saturday.

Tropical storm watches are in effect for parts of the Florida Peninsula, including Miami, Fort Lauderdale and West Palm Beach. A watch means tropical storm conditions are possible Saturday and Saturday night.

Hurricane warnings have been issued for the Bahamas, including Nassau, Freeport and the Abacos Islands, where hurricane conditions are expected into Saturday. Tropical storm warnings remain in effect for the Dominican Republic. A warning means tropical storm conditions are either expected or are already occurring.

Isaias is expected to make a northward, then northeastward turn this weekend into early next week. But exactly when and how sharp that turn occurs will heavily influence impacts in Florida and along the East Coast.

Here is the 5 AM advisory on Hurricane Isaias. The system is expected to strengthen into a category 2 hurricane over the Bahamas and the track is just off South Florida’s coastline. Any slight shift in the cone could change IMPACTS QUICKLY for South Florida. pic.twitter.com/3jmhKbAN8m

JUST IN: Hurricane Isaias is expected to strengthen from a Category 1 to a Category 2 hurricane as it crosses over the Bahamas on Friday and Saturday, lashing the still-recovering islands with up to 100 mph sustained winds. https://t.co/RqNFugkbCd

Previous LIVE VIDEO: Fauci, Redfield, Giroir Testify Before House
Next WH Overpaid For Ventilators By Up To $500 Million