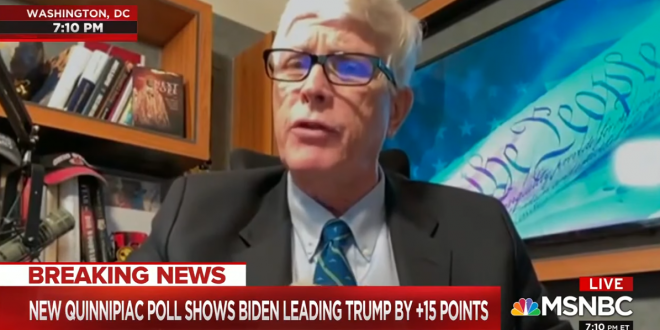 During a MSNBC segment on the grim state of polling for President Donald Trump, conservative pundit Hugh Hewitt offered his own highly skeptical assessment of the bad news confronting the president in one key swing state — and his reasoning for this disbelief was downright Palinesque.

“On this ‘shy Tory,’ that’s a term we invented when [former UK Prime Minister] John Major won an upset victory, that’s not the model I’m looking for. I’m looking for the Brexit model where [UK political strategist] Dominic Cummings went out and found three million new voters,” Hewitt explained about Trump’s path to victory in 2020.

Then he offered up a bit of political logic that evoked Sarah Palin’s infamous “You can actually see Russia from land here in Alaska” claim. “I’ll tell you, Steve, I grew up seven miles from Pennsylvania. I don’t believe that number today.”

Hewitt was raised in Warren, Ohio. Thousands of mocking tweets had Hewitt trending on Twitter for much of last night. Many of those tweets expressed anger at MSNBC for having him on.