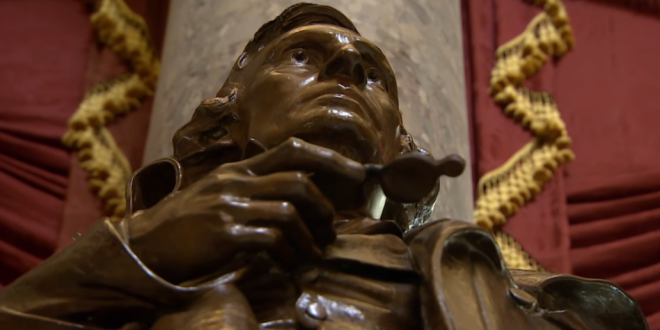 House Votes 305-113 To Remove Confederate Statues From US Capitol Hall, All No Votes Were Republicans

A bipartisan House voted to remove statues of historical figures who served the Confederacy from the U.S. Capitol Wednesday, giving the building’s architect $2 million and four months to complete the job.

The bill, which passed the House by a 305-113 vote, mainly targets 12 statues in the Capitol’s Statuary Hall memorializing Confederate leaders, along with a bust of former Supreme Court Chief Justice Roger Brooke Taney — author of the 1857 Dred Scott v. Sandford decision.

That statue is displayed in the former Supreme Court chamber inside the Capitol, immortalizing a decision which declared African Americans, “so far inferior, they had no rights which the white man was bound to respect.”

House GOP and Democrats vote to banish Robert E. Lee and 15 other statues from the Capitol https://t.co/VcBzZioASa h/t @susanferrechio

House votes to remove Confederate statues from the US Capitol; all 113 no votes came from Republicans: #AndSoItBegins #RealChange #WednesdayWisdom https://t.co/KuK8HJh6o7

Tags Confederacy US Capitol US History US House

Previous Trump Responds To Biden: I’ve Done More For Black Americans Than Anybody, Except For Maybe Lincoln
Next CHATTER AWAY: Overnight Open Thread