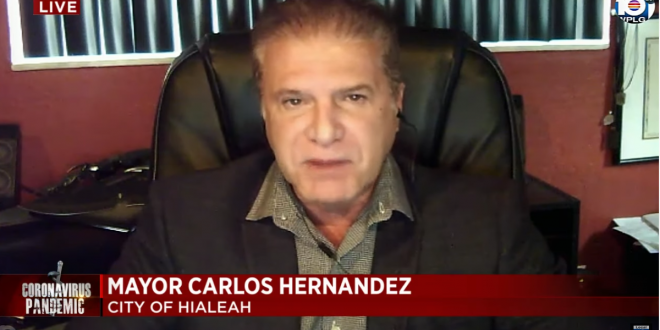 The mayor of one of the largest cities in Florida said Monday that his community is at a “critical stage” in the pandemic and called for more of a unified statewide strategy, saying a patchwork of rules is rendering the restrictions in his area largely ineffective.

“It’s a breaking point,” Hialeah, Fla., Mayor Carlos Hernández said on CNN’s “New Day,” recounting late-night conversations with officials at hospitals in his city. Florida’s current hospitalizations peaked at 9,363 on Sunday, according to data tracked by The Washington Post.

Early this month, Miami-Dade County imposed a 10 p.m. to 6 a.m. curfew intended to limit interactions that could spread the coronavirus. But Hernández said that with fewer restrictions in neighboring Broward County, people in Miami-Dade can just head over there when curfew sets in.

Hialeah is the sixth-largest city in Florida.

Mayor Carlos Hernandez says Hialeah, Florida, is at a “breaking point.” The curfews in his county are driving people to other counties instead of staying home, he says, calling for statewide action to combat the coronavirus pandemic.
“You can’t fix this by pieces” pic.twitter.com/gIEYJRmxUN