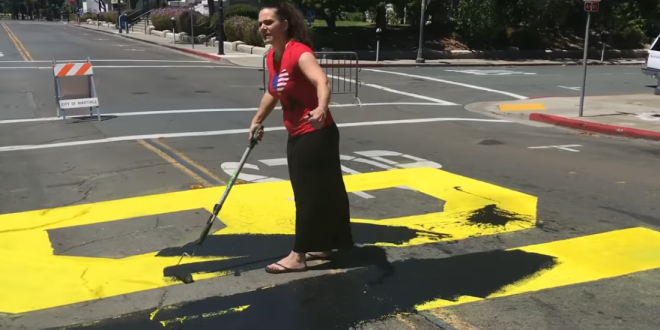 A white California couple has been charged with a hate crime after they were seen on video defacing a Black Lives Matter mural, according to a statement from the Contra Costa District Attorney’s office. Two people, identified by the district attorney as Nicole Anderson, 42, and David Nelson, 53, were seen on July 4 painting over the B and L in the word “Black,” which had been painted in yellow, with black paint.

In the video, the man identified as Nelson can be heard saying, “There is no racism. It’s a leftist lie,” and, “No one wants Black Lives Matter here.” He was wearing Trump 2020 garb and yelled “Make America Great Again.” Anderson was the one seen painting over the letters, while Nelson stood alongside her. Anderson and Nelson also face charges of vandalism and possession of tools to commit vandalism or graffiti.

Previous CHATTER AWAY: Overnight Open Thread
Next Federal Reserve Says Coin Shortage Is Due To COVID