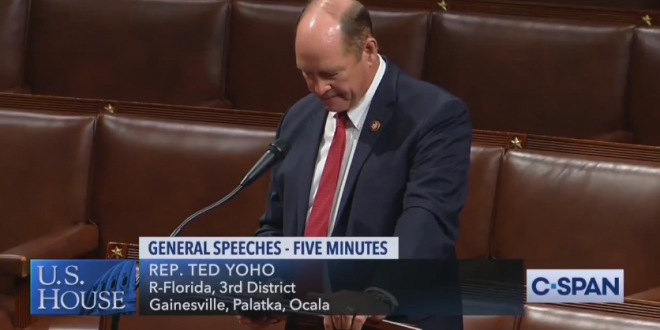 Florida Man says he’s sorry. Rep. Ted Yoho (R-Fla.) apologized Wednesday to Rep. Alexandria Ocasio-Cortez (D-N.Y.) for calling her a “f—ing b–ch” after a spat on the steps of the U.S. Capitol.

The conservative lawmaker took the House of Representatives floor to say sorry “for the abrupt manner of the conversation I had with my colleague from New York.”

Even as he said he was sorry, Yoho claimed that he was not referring to AOC when he uttered the misogynistic epithet seconds after walking away from the argument. “The words attributed to me by the press were never spoken to my colleagues,” said Yoho.

This is not an apology. It’s gaslighting. He apologized that YOU misunderstood his words. GTFO with this trash. pic.twitter.com/ckmW4L0RtG

“Freedom” Caucus attacked @RepLizCheney for not being Trumpian enough.

Trump sent good wishes to a conspirator who recruited underage girls to be abused by a sexual predator.

That’s a helluva thing. I said yesterday when you’re cursing at @AOC you’re losing. Well, Yoho, you’re losing even worse when you tell her you’re sorry but your “God, family and country” made you do it. What a yahoo. https://t.co/sOt8yK7df0

Yesterday, Rep Ted Yoho, a self-described “man of God” but actually a “full on misogynist” called Congresswoman AOC an “effing b***”. Here’s his non-apology, framed as an apology, for doing that. He makes himself look like the victim.
Truly, a B*tch Move.pic.twitter.com/QjBvyizZsP

Ted Yoho: I had to call AOC a “fucking bitch” because of how much I love “my God, my family, and my country.” https://t.co/CIUzZqzOHY

You’ll notice that after denying saying what we know he said, and then making himself out to be the victim, Rep. Yoho then implies @AOC is “encouraging” poor Americans to “break the law.”

That is not even close to what she said. https://t.co/IcxU1CBCzM