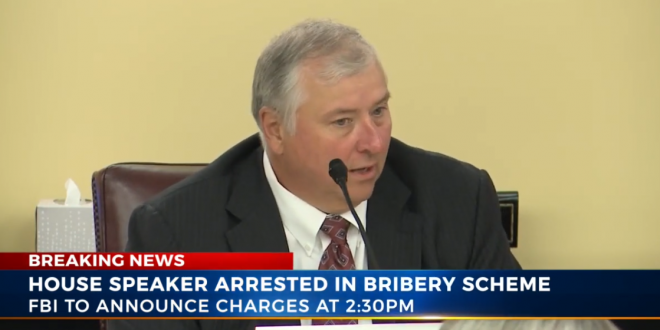 Federal officials arrested Ohio House Speaker Larry Householder and four others on Tuesday morning in connection with a $60 million bribery case. U.S. Attorney David DeVillers’ office would not discuss details of the case, but a source involved in the investigation confirmed Householder’s arrest to The Enquirer.

Also arrested, according to the source: Neil Clark, founder of Grant Street Consultants and once called by USA Today “one of the best-connected lobbyists in Columbus;” former Ohio Republican Party chair and consultant Matthew Borges; Juan Cespedes, co-founder of The Oxley Group in Columbus; and Jeffrey Longstreth, adviser to Householder.

“President Obhof chairs JLEC, the Joint Legislative Ethics Committee, and cannot comment on the case,” Fortney said. “We have session today at 1:30pm and will continue to conduct the Senate’s business. All questions about today’s headlines are referred to the House.”

2019’s House Bill 6 was a “Clean Air Act” that contained a bailout for two nuclear power plants managed by FirstEnergy. There was a controversial effort to block it from going into effect that included accusations of assault on petitioners, bribery, and scare ads involving China.