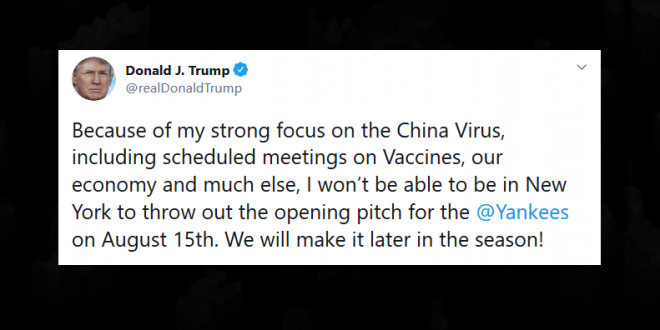 From Golf Course Trump Tweets He’s Too Busy To Pitch

President Trump announced Sunday he wouldn’t be throwing out the opening pitch for the New York Yankees next month as he had planned, citing meetings and other work related to the U.S.’s COVID-19 outbreak. In a tweet, Trump said that he would plan to throw out the first pitch at a game later in the MLB’s season, which began last week.

Because of my strong focus on the China Virus, including scheduled meetings on Vaccines, our economy and much else, I won’t be able to be in New York to throw out the opening pitch for the @Yankees on August 15th. We will make it later in the season!

Trump doesn’t want to throw out the first pitch because he knows the baseball players will be kneeling. He can’t deal with peaceful protests.

You were golfing with Brett Favre while the country was approaching 150,000 COVID-19 deaths.

ADMIT IT — you’re too chickenshit to throw out a pitch at an EMPTY stadium!!!!

What a sad, pathetic clown. pic.twitter.com/yjAkqDyIS9

The real reason Trump won’t be coming to NYC is because he is absolutely loathed in this city. Even before he became president, he was hated in NYC: in 2016, 79% voted for Hillary & 19% voted for Trump. After the past 4 years, that loathing has intensified!

Tweets the busy guy from his New Jersey golf course. He cant handle the fact that both teams will be taking a knee- even if before the anthem.

Hahahaha. It’s because you will get booed even with no fans in the stadium, asshole.

There was a 100% chance of you canceling. No you won’t make it later in the season. You will never again throw a baseball that far. Even the Little League distance is not possible for you. There are no exceptions. Degenerative Neurological Disease. Frontotemporal Dementia- PSP.

President Trump throws red hats to group of supporters gathered along the motorcade route in Bedminster, NJ, where he spent the weekend at his private golf club pic.twitter.com/r8in5V3quR