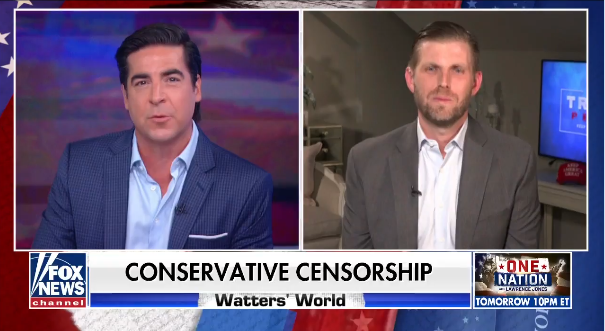 Fox News host Jesse Watters says a pro-Trump, right-wing conspiracy theory movement that was deemed a terror threat by the FBI has actually “uncovered a lot of great stuff.”

He spoke with Eric Trump late Saturday about Twitter’s recent crackdown on QAnon — the fringe movement blamed for playing a role in at least two murders, two child abductions, and a string of other violent incidents.

Watters wondered aloud if perhaps the social media giant was attempting to “interfere in an election” by banning QAnon believers who claim Democrats, Trump critics, and many influential figures are Satanic child sex traffickers and cannibals.

The host brushed off “some crazy stuff” that has been tied to the theories, like a fake news story that inspired a man to fire an assault weapon in a Washington, DC pizza shop in the now-infamous Pizzagate hoax and a wave of unfounded theories that home goods retailer Wayfair is involved in child sex trafficking.

“Q can do some crazy stuff, with the pizza stuff, and the Wayfair stuff, but they’ve also uncovered a lot of great stuff when it comes to Epstein and it comes to the deep state,” Watters said. “I never saw Q as dangerous as antifa.”

Fox News’ @JesseBWatters has some high words of praise for QAnon — which has been responsible for two murders, two child abductions, one terrorist incident, one church vandalism, one restaurant arson…etc…. pic.twitter.com/n4MiMahhpi