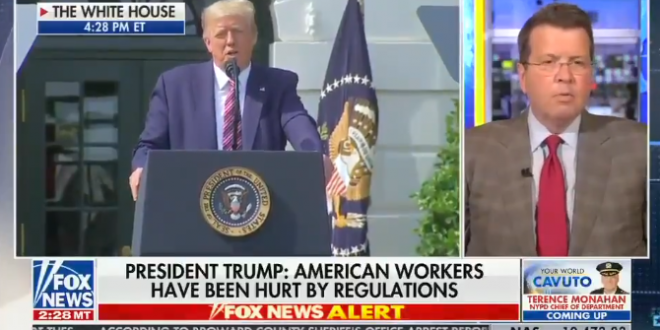 “I do want to clarify a couple of things he said, that no president in history has cut regulations as much as he has. That is true. But the president just mischaracterized the regulations that were added under Barack Obama — they were largely financial related.”

“You might recall we had this little thing called the financial meltdown and much of those regulations were geared to preventing banks from ever investing in things like risky mortgage securities, pooling them, selling them off.

“The unemployment rate did, under Barack Obama, go down from a high of 10% to around 4.7%. President Trump, of course, sent that even lower, eventually getting us down to a 3.5% unemployment rate.

“But I didn’t want to leave you with the impression that during those eight years when Obama first came into office and we were bleeding about a million jobs a month, that that was standard fare and that characterized the whole eight years.

“It was not a disaster under Barack Obama. Not only did the Dow essentially triple during his tenure, but whether you want to call the increase regulations and other things that police financial companies, as a bane to our existence, those companies did very well.

“Americans did very, very well. So I just want to put that in some context here.” – Fox News host Neil Cavuto, who will surely be a tweetstorm target for breaking into Trump’s lie-fest with some truth-telling.

Cavuto: ‘It was not a disaster under Barack Obama, not only did the Dow essentially triple, but … Americans did very, very well.’ pic.twitter.com/T47seNoLak

Things under Obama were a disaster. I wish someone would tell that to Cavuto!

Cavoto is a globalist shill and in the tank for wall street…… Cavuto may act like he is a honest straight shooter, this is a lie. Neil Cavuto loves to sbort coke and share his wife more than Will Smith…. I know this for a fact…..

How dare you Neil Cavuto the Partisan PIG. you should be fired. Fox would be better off with out you. And yes You are FAT… https://t.co/cVefCLUcDb

Previous Trump Employs Red And Blue Trucks To Symbolize The “Weight” He’s Lifted Off Regulations, Lies Many Times
Next #QAnon Show: The Clintons Have Been Executed And Trump Will Show It On A WH Pay-Per-View Channel