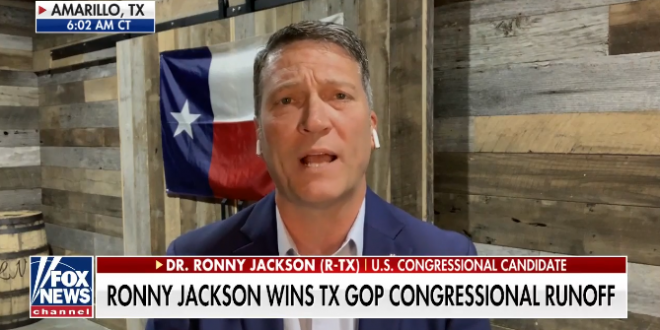 “I think that wearing a mask is a personal choice, and I don’t particularly want my government telling me that I have to wear a mask.

“And so I think that’s a choice that I can make. I think you have to look at your personal circumstances and look at your surroundings and decide if that’s right for you.

“I’m a firm believer that that is a personal choice. I encourage people, if they want to wear a mask, wear a mask, but I don’t wear a mask all that often to be honest with you.” – Former White House doctor Ronny Jackson, on Fox & Friends this morning.

Yesterday Jackson won his US House runoff after being passed over to be Secretary of Veteran Affairs over allegations that he drank on the job and over-prescribed medications. According to Jackson, Trump weighs 239 pounds and might live for 200 years.

Congratulations to @RonnyJackson4TX on a big win against a tough and really good opponent. Ronny will be a fantastic Congressman – Will represent the wonderful people of the Great State of Texas, and the USA, very well. Proud of you Ronny!!!

It’s clear the left & liberal press are manipulating COVID stats to maintain fear. Their goals are political. They don’t care about huge protests that destroy statues & disrespect police. Anything to hurt @realDonaldTrump & justify cheat-by-mail. America has had enough! #TX13 pic.twitter.com/U1OU7wod8x

The liberal media and the far left is driving a political agenda. They want to rig the election in November, so they’re spreading fear instead facts to push their cheat-by-mail scam. Americans need to get back to work, and get back to school. #TX13 pic.twitter.com/TRCX7NWIgN

Previous Russian Scientists Claim Promise In First Vaccine Trial
Next Trump To Get “Involved” In Case Against St. Louis Nuts