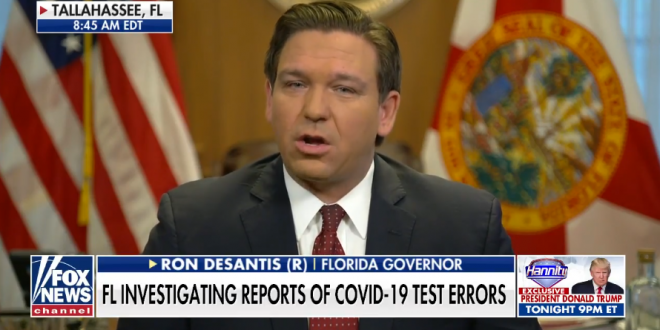 Florida Gov. Ron DeSantis told Fox News on Thursday that “there’s a testing industrial complex now ” that could be inflating positive COVID-19 test results. DeSantis made the comment after host Ainsley Earhardt noted that “some people” in Florida have said, “they never got a test, but now they’re listed as testing positive.”

“It didn’t happen at any of the sites that the state of Florida is running, thankfully,” DeSantis said. “There’s a testing industrial complex now. There’s a lot of money at stake here, people cranking out these tests. There’s private companies involved.”

“You hear a lot of things, obviously, but I’ve heard this so many times from people that really don’t have a reason to make anything up that I think there’s something there, so we absolutely want to get that evidence.”

Florida reported its largest number of deaths in a single day from the coronavirus: 173 on Thursday. The state says 10,249 people tested positive for the virus. Florida is behind only California and New York in total cases. Other states, including Texas and California, also posted record deaths this week as the nation’s total number of COVID-19 cases topped 4 million.

Despite the record number of deaths Thursday, DeSantis stood by earlier statements that he sees signs that coronavirus cases are plateauing in Florida. “People are not coming to the ED (Emergency Department) in as big a numbers as they were two weeks ago,” he said. “The last few days have been less than half that what it was the first week of July. That is a positive trend.”

“If this is true,” says a top campaign aide to the president https://t.co/0k9U6RZHTQ

On Fox & Friends, FL Gov. Ron DeSantis blames "a testing-industrial complex" for people who are reportedly listed as testing positive for COVID-19 despite never being tested. He goes on to suggest that the death toll is inflated. pic.twitter.com/GNBQe5rvUM