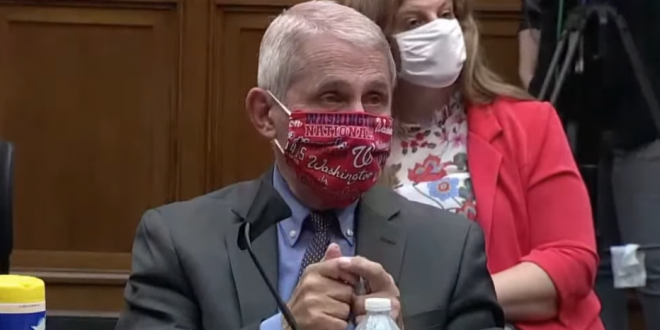 Fauci Pushes Back After Badgering By Gym Jordan

Dr. Anthony Fauci and Ohio Rep. Jim Jordan got into a heated back-and-forth during a House subcommittee hearing on the novel coronavirus Friday morning. It began when Jordan, one of President Donald Trump’s biggest attack dogs on Capitol Hill, repeatedly asked Fauci to weigh in on whether widespread protests increase the spread of COVID-19.

Fauci said that in general, large crowds, particularly those including people who aren’t wearing masks, contribute to higher infection and transmission rates. “Should the government limit the protesting?” Jordan asked. “I don’t think that’s relevant,” Fauci said. “I’m not in a position to determine what the government can do in a forceful way.”

“So you’re allowed to protest millions of people on one day in crowds yelling, screaming, but you try to run your business and you get arrested and if you stood right outside of that same business and protested you wouldn’t get arrested, you don’t see any inconsistency there?” Jordan asked.

“I said crowds. I didn’t say specifically. I didn’t say protests,” Fauci said, prompting Jordan to respond with, “So the protests don’t increase the spread of the virus?”

“I didn’t say that,” Fauci shot back. “You’re putting words in my mouth.” Fauci continued to say that crowds lead to the spread of the virus, especially when masks are not worn, but reiterated that he would not reveal a specific stance on the protests.

Jim Jordan just tried to bait Dr. Fauci into his political games, hammering him about the government closing down church services and gyms, and not cracking down on protests.

Fauci wasn’t having it. pic.twitter.com/JrsXo5GzzG

“You’re putting words in my mouth.”

Jim Jordan, fresh off of imploring Democrats to not interrupt Bill Barr so much, won’t let Dr. Fauci finish a sentence in this hearing

A bemused Dr. Fauci tells Rep. Jim Jordan (R-OH) that “you’re putting words in my mouth” about whether protests led to increased spread of the virus. pic.twitter.com/hRad8AmeuE

Rep. @Jim_Jordan asks if protests should be limited.

Dr. Anthony Fauci: “I’m not going to opine on limiting anything. I’m telling you what it is the danger is. You can make your own conclusion about that. You should stay away from crowds no matter where the crowds are.” pic.twitter.com/DfgmahK35F