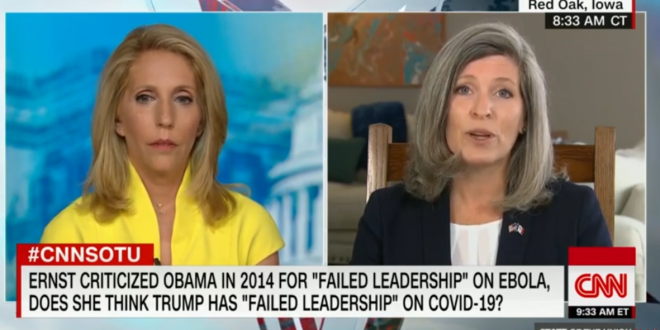 Sen. Joni Ernst (R-IA), when confronted with her previous criticisms of then-President Barack Obama’s handling of the Ebola outbreak in 2014, claimed on Sunday that President Donald Trump is “stepping forward” in his response to the coronavirus pandemic that’s now killed 130,000 Americans.

During the 2014 midterm elections, Ernst joined a chorus of Republicans who exploited the outbreak of Ebola in West Africa for political gain.

Despite Obama deploying 3,000 service members to Africa to contain the virus, and only 11 confirmed cases and two deaths recorded in the United States, Ernst at the time accused the president of “failed leadership” on the disease.

Joni Ernst said that 2 deaths from Ebola under President Obama was “failed leadership,” but refuses to admit that 130,000 deaths from COVID-19 under trump is a failure.