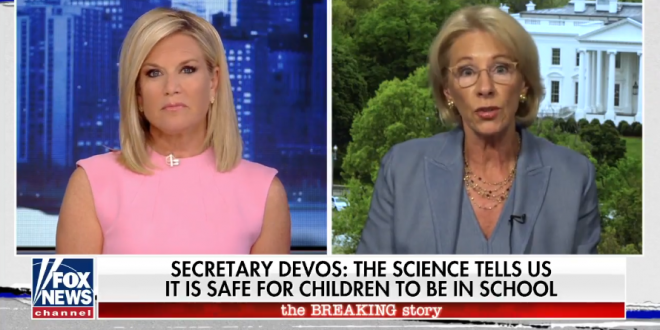 “Certainly we all want school to be safe for kids. But the reality is, the science tells us that in – being in school is safe for children. There was just a study that came out from Germany on Monday that suggests that actually kids might even be stoppers of the virus.

“That it was over 2,000 kids studied and the virus did not spread, did not grow in any way.

“The science says it is safe for kids to be in school. We clearly have to follow guidelines around hygiene, wearing masks when appropriate, and ensuring that teachers have distance and protection. But this can be done. It’s a matter of will.” – Sec. Betsy DeVos, speaking on Fox News.

Well, there’s a problem with that. The German study has not been peer-reviewed; it is still in preprint review by the Lancet, meaning it should not be used to guide clinical practice. Moreover, the German researchers told The Fact Checker that the results do not apply to a country such as the United States, where infections have been soaring. Germany, by contrast, is among the countries that are considered to have handled the outbreak with skill and diligence, keeping infections per million people relatively low.

“Our results depict a situation with low infection rates after the initial transmission peak is under control,” Jakob Armann, a pediatric infectious-disease specialist at University Children’s Hospital in Dresden and co-author of the study, said in an email. “If you have rising infection rates — as in the United States currently — putting people in close contact will obviously lead to transmission of respiratory viruses as SARS-CoV-2.”