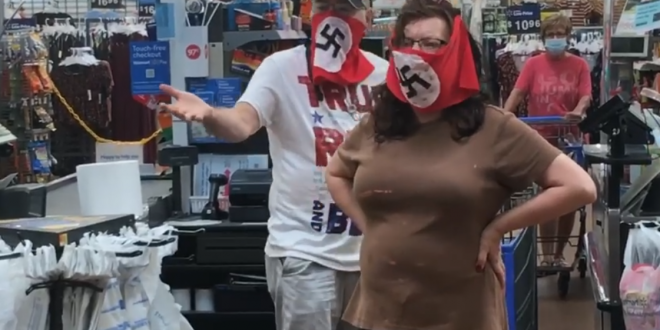 Just before noon Saturday, police officers in Marshall, Minn., were called to the town’s Walmart on a report that two shoppers were wearing masks emblazoned with swastikas.

Another shopper, Raphaela Mueller, the vicar of a southwest Minnesota parish, filmed the swastika-wearing man and woman as they were confronted by others in the store. Then she posted the video on Facebook, where it went viral.

“If you vote for Biden, you’re going to be living in Nazi Germany,” the woman with the swastika mask told Mueller, as her companion bagged up toilet paper and an enormous canister of cheeseballs.

At the store’s request, police issued a trespassing order, warning the pair that they will be arrested if they return.