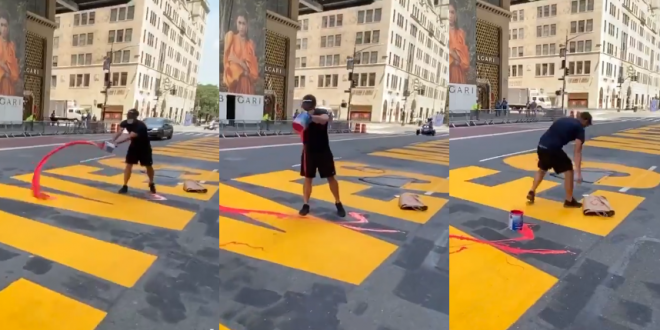 Twitter user Oscar Vela posted a video of a person who walked up to the “V” in “Black Lives Matter,” took a can of paint out of a paper bag and threw the paint on the mural, located on Fifth Avenue. The person then left the paint can and ran off.

An NYPD official told USA TODAY a criminal mischief complaint has been filed regarding the incident and detectives are investigating. President Donald Trump spoke out against the mural when it was proposed by New York City Mayor Bill de Blasio. Trump called the then-proposed mural a “symbol of hate.”

To whoever vandalized our mural on 5th Avenue: nice try. @NYC_DOT has already fixed it.

The #BlackLivesMatter movement is more than words, and it can’t be undone. pic.twitter.com/nlYTALCWxJ