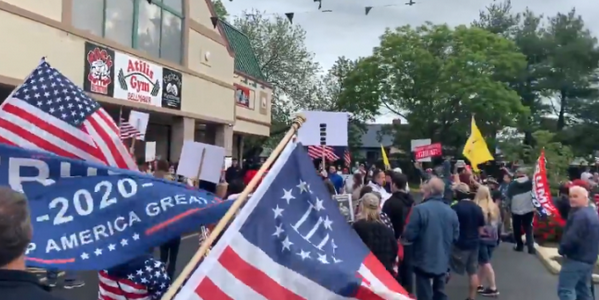 New Jersey can flex its muscle over a gym that has repeatedly defied the state’s coronavirus orders, a judge ruled Friday. Gov. Phil Murphy’s administration has the authority to close the business, the Atilis Gym in Bellmawr, after it openly flouted the governor’s executive order that they remain shuttered during the pandemic.

Ian Smith, one of the South Jersey gym’s owners, was still defiant after the courtroom loss, posting a video to Facebook saying he would refuse to leave the premises of the business. “We will not back down under any circumstances,” Smith said while wearing a hat that reads “lions not sheep” and a T-shirt bearing the slogan, “Make America Lift Again.”

The screencap above is from a May protest at the gym attended by members of the so-called Three Percenters militia. The protest was aired live by Fox & Friends, who sent host Pete Hegseth to the scene for fawning interviews.

Remember Atilis Gym, the South Jersey gym that reopened in May against Gov. Murphy’s orders? It’s back in action again, and this time, the owners say they’ll take their doors off the hinges to prevent the state from changing their locks a second time. https://t.co/PLy9zb6VCC

The right is very excited about Atilis Gym in Bellmawr, NJ re-opening in defiance of the stay-home order this morning.

1. The virus will spread like wildfire in the gym.

2. The 3 percenter flag (III) shows that violent neo-Nazis are present.pic.twitter.com/aCz2XMpECD