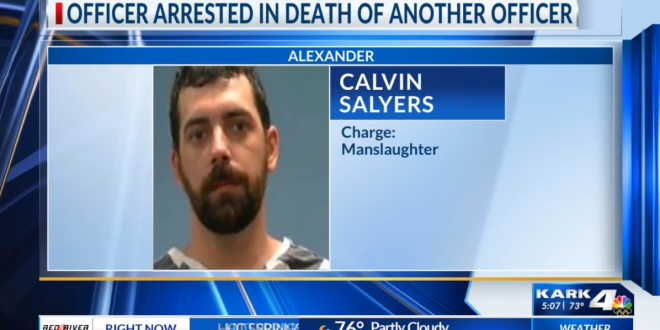 An Arkansas police officer who allegedly told a colleague that he would shoot any protesters who came to his door was charged with manslaughter in the fatal shooting of a fellow officer who knocked on his door in June.

When the police brutality protests in Minneapolis began earlier this year, the accused officer, Calvin “Nick” Salyers, told a colleague that he would “shoot through the door” at any protesters who came to his residence, according to court documents.

Salyers, 33, was charged with manslaughter for allegedly shooting and killing his fellow officer, 36-year-old Scott Hutton, through the door of Salyers’ residence on June 3.

Calvin Salyers, 33, was charged after authorities say he shot fellow officer Scott Hutton after Hutton showed up at his door to get something from his home. https://t.co/ptm9GxdlUN

Previous Alaska Airlines Flight Makes Emergency Landing After Man Threatens To Kill Everyone “In The Name Of Jesus”
Next Prosecutors Argue Against Bail For Ghislaine Maxwell: “Extreme Risk Of Flight,” Found With Phone In Tinfoil