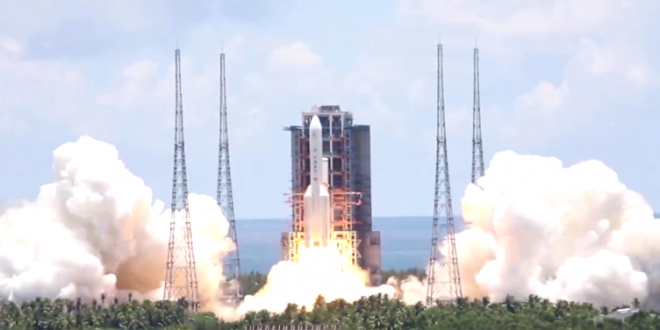 A powerful Long March 5 rocket blasted off Thursday carrying a Chinese orbiter, lander and rover on a seven-month voyage to Mars, the second of three high-stakes missions to the red planet and one that, if successful, will put China on the front lines of interplanetary exploration.

China did not announce the launch date or time in advance, but a notice to mariners warned of an impending flight and sure enough, the Long March 5 roared to life and streaked away from the Wenchang Satellite Launch Center on Hainan Island southwest of Hong Kong at 12:41 a.m. EDT (12:41 p.m. local time).

The flight comes on the heels of the successful launch of a United Arab Emirates Mars orbiter, called Hope, from Japan on Sunday. Next up will be the launch of NASA’s $2.4 billion Perseverance Mars rover from Cape Canaveral on July 30.

All three missions are taking advantage of Mars’ current position relative to Earth, something that happens every 26 months.

China Thursday launched its first #Mars probe on a Long March-5 rocket from the Wenchang Spacecraft Launch Site on the coast of southern China’s island province of Hainan pic.twitter.com/qTSqHUVzab

With today’s launch, China is on its way to join the community of international scientific explorers at Mars. The United States, Europe, Russia, India, and soon the UAE will welcome you to Mars to embark on an exciting year of scientific discovery. Safe travels Tianwen-1!

China successfully launched an unmanned probe to Mars in its first independent mission to another planet https://t.co/CmFep4vIbm pic.twitter.com/llswdIwWOf