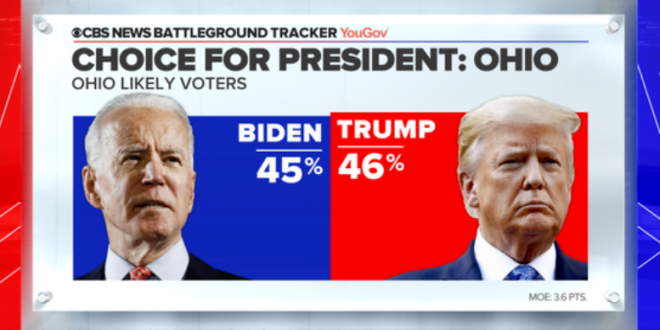 Most parents are wary of sending their children back to school in the face of it, and they feel the president doesn’t care as much about the risks to their kids. Most Americans support the aim of the protests — and Biden leads among all of them.

In the upper Midwest, we see this playing out in two key states the president flipped from Democrats in 2016: Biden leads in Michigan by six points, and the president has the slightest one-point edge in Ohio, where he won by a comfortable margin four years ago.

A majority of Biden’s support in both these states comes from people who are mainly voting against Mr. Trump rather than for him. Seventy percent of Michigan’s registered voters dislike how the president handles himself personally.

While the president leads among Americans who are skeptical of the Black Lives Matter movement, and who continue to downplay the impact of the virus, all of those groups are outnumbered at the moment. https://t.co/bCYldQx8UP

Crazy Nancy Pelosi said I made a mistake when I banned people from infected China from entering the U.S. in January. Tens of thousands of lives were saved, as she danced in the Streets of Chinatown (SF) in late February. Biden agreed with her, but soon admitted that I was right!

The Trump Campaign has more ENTHUSIASM, according to many, than any campaign in the history of our great Country – Even more than 2016. Biden has NONE! The Silent Majority will speak on NOVEMBER THIRD!!! Fake Suppression Polls & Fake News will not save the Radical Left.