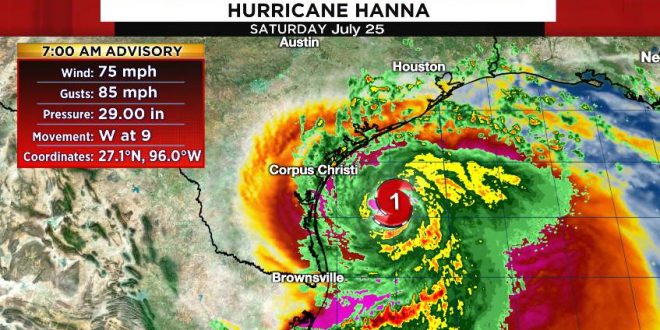 Tropical Storm Hanna was upgraded to a hurricane Saturday, moving toward the Texas coast and threatening to bring heavy rain, storm surge and possible tornadoes. Hanna is now the first hurricane of the 2020 Atlantic hurricane season, according to the National Hurricane Center.

Maximum sustained winds increased to 75 mph, the hurricane center said in a Saturday morning update. The storm was centered about 100 miles east-southeast of Corpus Christi, Texas and was moving west at 9 mph.

A storm surge warning in effect from Baffin Bay to Sargent was extended south of the bay to Port Mansfield, Texas. Storm surge up to 5 feet was forecast for that area. People were advised to protect life and property from high water.