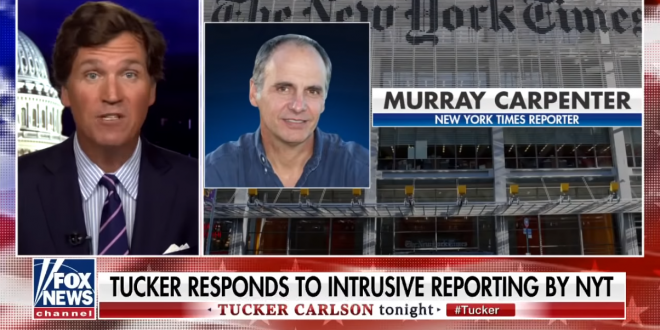 On Monday night, Fox News host Tucker Carlson made a surprising accusation: the New York Times, he said, was trying to endanger him and his family by revealing where they live in an upcoming story. As he lambasted the newspaper on-air, Carlson suggested that his prime-time show could expose the home addresses of the reporter and Times editors.

Within hours, an army of conservative Twitter accounts started publicly posting the address and personal information of the reporter Carlson identified as the story’s writer. Many encouraged people to harass the reporter.

In a statement to The Washington Post, a spokesperson for the Times denied Carlson’s claims. “While we do not confirm what may or may not publish in future editions, the Times has not and does not plan to expose any residence of Tucker Carlson’s, which Carlson was aware of before tonight’s broadcast,” the spokesperson said.

Yesterday Carlson, Sean Hannity, and other Fox News hosts were named in a sexual harassment suit filed by two female former Fox employees. Sure seems like this claim is a diversion tactic, doesn’t it?

.@nytimes does not plan to publish Tucker Carlson’s residence, which Carlson was aware of before his broadcast tonight. pic.twitter.com/npg93Cdmbm

Previous CHATTER AWAY: Overnight Open Thread
Next Kanye West Claims Wife Wants To Have Him Committed