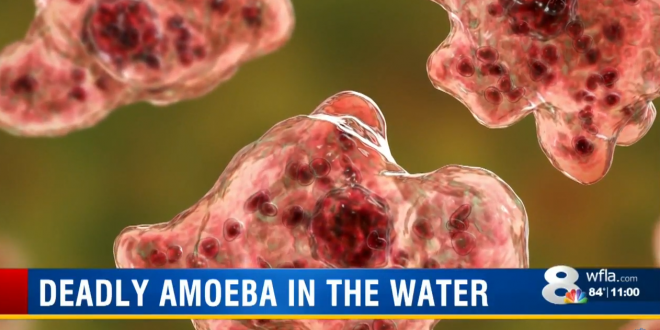 Brain-Eating Amoeba Emerges In Florida Because 2020

Health officials in Florida have sounded the alarm over the discovery of a rare, brain-eating amoeba in the county that encompasses Tampa and several other cities.

The Florida Department of Health announced the news Friday that a person in Hillsborough County had suffered a confirmed infection of naegleria fowleri, a single-celled living amoeba that can lead to a dangerous infection of the brain called primary amebic meningoencephalitis.

The amoeba is usually found in lakes, rivers, and ponds, particularly when the water is warm. There have only been 37 confirmed cases of the amoeba since 1962, and health officials say the best way to prevent an infection is by “avoiding nasal contact with the waters, since the amoeba enters through the nasal passages.”

The DOH recommended people avoid bodies of warm freshwater around power plants and shallow fresh water during periods of high water temperature. They should pinch their nose when playing in warm freshwater.

The DOH also noted that you could possibly be exposed to the amoeba through a neti pot when rinsing congested sinuses. “Use only boiled and cooled, distilled, or sterile water for making sinus rinse solutions for neti pots or performing ritual ablutions,” it said.

In the US, there have been 143 known infected cases of the amoeba, according to the Florida DOH. Only four have survived.

One person contracted Naegleria fowleri in Hillsborough County. Naegleria fowleri is a microscopic single-celled living amoeba. The amoeba can cause a rare infection of the brain called primary amebic meningoencephalitis (PAM) that destroys brain tissue and is usually fatal. pic.twitter.com/icT66tqlkU