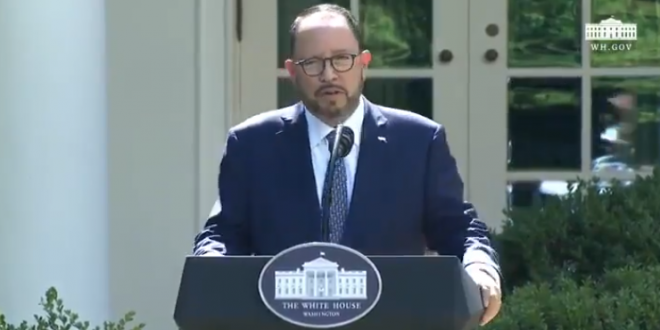 Goya, which says it’s the nation’s largest Hispanic-owned food brand, is facing a backlash after its chief executive met with and heaped praise on President Donald Trump at the White House on Thursday. On Twitter, #BoycottGoya and #GoyaFoods were trending and some Latinos were also using the hashtag #goyaway.

Trump hosted a group of Hispanic supporters — including politicians and business magnates — one day after he met with Mexican President Andrés Manuel López Obrador, who was facing a backlash of his own.

Goya Foods CEO Robert Unanue attended the event and used the occasion to announce a donation of 1 million cans of chickpeas and 1 million pounds of other food to food banks. “We’re all truly blessed at the same time to have a leader like President Trump, who is a builder,” Unanue said at the White House.

.@GoyaFoods has been a staple of so many Latino households for generations.

Now their CEO, Bob Unanue, is praising a president who villainizes and maliciously attacks Latinos for political gain. Americans should think twice before buying their products. #Goyaway https://t.co/lZDQlK6TcU

CEO of Goya Foods, Robert Unanue: “We’re all truly blessed to have a leader like President @realDonaldTrump” pic.twitter.com/vqMP4C3rqb

Previous Trump: People Rarely Ace A Cognitive Test Like I Did
Next Federal Court Orders Release Of 2010 Prop 8 Trial Video