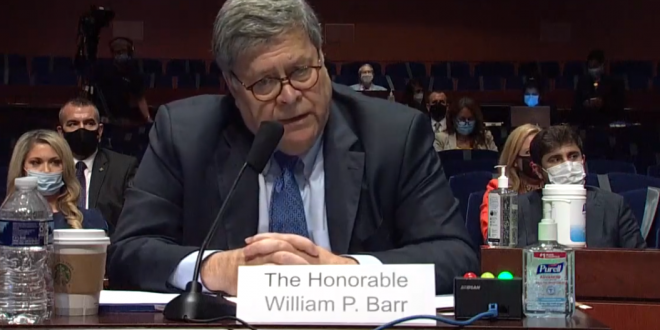 Barr To Get COVID Test Due To Contact With Gohmert

Weren’t we told that everybody that gets near Glorious Leader must be tested?

Attorney General William Barr will be tested for coronavirus one day after he came into close contact with a GOP lawmaker who since tested positive for the virus, a Justice Department spokeswoman confirmed.

Barr, who testified on Capitol Hill Tuesday before the House Judiciary Committee, came within close range of Rep. Louie Gohmert (R-Texas) shortly before he entered an auditorium in the Capitol where the hearing took place.

While Barr had arrived wearing a mask, he walked into the hearing room without one, during which time he came into contact with Gohmert, who also was not wearing a mask. The two exchanged a comment or two before Gohmert and Barr parted ways.

ACTUALLY… here is a video of AG Barr and Gohmert.

While Barr arrived with a mask, it was off when he walked into the hearing room, so both men were not wearing masks at this time. pic.twitter.com/xm6wuq6QvW