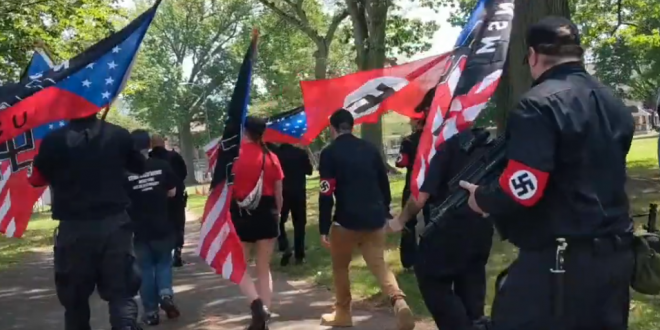 Despite assurances they would not appear, approximately 15 members of National Socialist Movement (NSM), many of them armed, rallied in Williamsport’s Brandon Park Saturday afternoon. The NSM members following a short march through the park stopped on the Elizabeth Street side where with the aid of a battery-powered megaphone they spewed their white nationalist ideology intermixed with profanity.

The NSM had applied for a permit to rally Saturday but Mayor Derek Slaughter denied it as he did for all mass gatherings in July due to the pandemic. Members noted they showed up anyway and accused Slaughter, the city’s first African-American mayor, of not believing in the Constitution. They referred to him using the “N” word. A female member proclaimed “God hates the gays” and led a chant against them using the “F” word.

The photo on this article shows about 15 uniformed neo-Nazis in Williamsport, Pennsylvania, today. Some of them are armed. https://t.co/Z9CfFwUcS8

The skinheads showed up with flags, their best SS mock uniforms and all the lard they could pack in their guts.

But given the police weren’t letting them move about (synagogue two blocks away) they ended up having a picnic.https://t.co/NoumFjjdIT pic.twitter.com/CpUQBK3j8V

Nazis are openly marching through Williamsport PA today. Have you had enough yet? pic.twitter.com/lI7irwL48Z