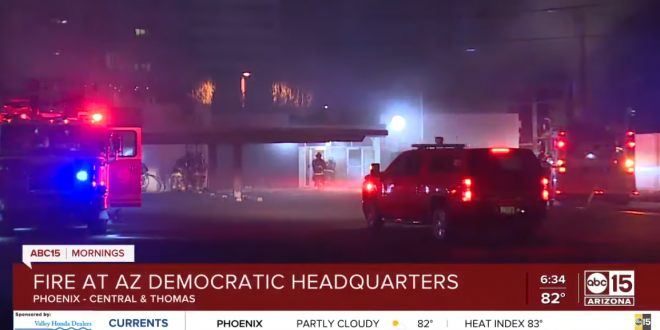 The headquarters of the Arizona Democratic Party in Phoenix caught on fire early Friday. The Phoenix Fire Department said firefighters were dispatched to the building near Central Avenue and Thomas Road around 1 a.m. for reports of smoke coming from the building.

When crews arrived, they found heavy smoke and fire coming from the building. “We’ve lost all of our stuff — computers, equipment, printers, the files, it’s all gone,” Democratic Party Chair Steven Slugocki said. The cause of the fire has not yet been determined. An investigation is ongoing.

Breaking overnight – investigators are working to figure out what started a fire at the Arizona Democratic Party building off of Central Ave. in Phoenix. @PHXFire says no one was hurt.
Video Credit – Phx Fire. Details on #12News pic.twitter.com/q2YuwH3ltX

At @MaricopaDems HQ.
Terrible to see all the work of so many dedicated Americans burn like this.
But the election goes on! VOTE!#Vote#ProtectDemocracy pic.twitter.com/ElMW8hlAlw