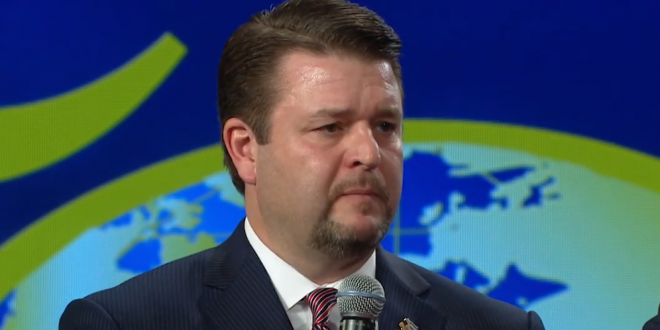 State Sen. Jason Rapert, R-Conway, is the first state senator in Arkansas to test positive for the coronavirus since the pandemic hit the state in March. In the spring, three state representatives announced that they had tested positive for covid-19.

Rapert, 48, is a self-described fiscal and social conservative who has served in the Senate since 2011 and is the only announced candidate for lieutenant governor in 2022.

He is chairman and chief executive officer of American Association of Health Share Ministries Inc.; president of Providence Financial Group Inc.; and founder and president of Holy Ghost Ministries.

As longtime JMG readers will recall, Rapert has appeared here many times over the last decade due to his battles against LGBT rights and same-sex marriage, and his successful campaign to place a Ten Commandments monument on the grounds of the Arkansas statehouse. He last appeared here in February 2020 when he launched a campaign to block state funding for PBS because openly gay actor Billy Porter appeared on the show.

Jason Rapert preaching about not being a “slave to fear” during a maskless service in arkansas weeks ago. Today he’s in the hospital with COVID-19 and pneumonia https://t.co/IHGUyFgxe0

It’s time for Christian elected officials to take a bold stand. Join with us to save our nation today. https://t.co/EHgxMZTcZx

These Leftist sickos should be run out of the country. https://t.co/eqR7OTIZXx

Previous CHATTER AWAY: Overnight Open Thread
Next Ingraham: If Biden Wins, Radicals Will Come For You