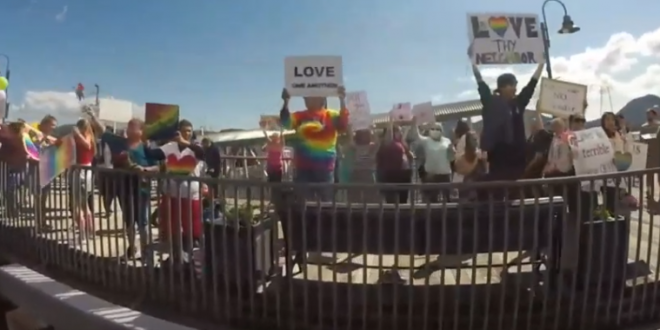 An ordinance that prohibits discrimination against LGTBQ individuals in Ketchikan city limits was passed today. The local law was approved by the Ketchikan City Council over the objections of religious advocates.

Though the U.S. Supreme Court ruled earlier this summer that the Civil Rights Act of 1964 prohibits discrimination on the basis of sexual orientation, gender identity and gender expression in employment, the ruling’s impact in other settings isn’t settled.

Ketchikan’s ordinance also bans discrimination against LGBTQ individuals in housing and in public businesses. The proposal followed a high-profile demonstration outside Heavenly Creations, a Ketchikan flower shop, after the owner reportedly refused to take an order for a same-sex wedding.

Heather Dalin, the owner of Heavenly Creations, defended her practices and policies. She told the council that they don’t discriminate and have often done business with the LGBTQ community. She said they had to draw the line at a marriage ceremony.

“When it comes to the holy sacrament of marriage, God’s word is clear. Marriage is one of the seven sacraments where the Lord Jesus Christ is present.”

“For you to pass an unnecessary ordinance to try and force myself to participate in a ceremony that violates not only God’s holy truth, but also strips my rights as an American, taxpaying, law-abiding citizen, is unreasonable.”

The city council’s vote was unanimous.

Ketchikan, population 14,000, is one of Alaska’s southernmost towns and is the birthplace of Sen. Lisa Murkowski.

#LGBTQ youth in #Ketchikan, #Alaska can wake up today knowing that they live in a city that will soon protect them from discrimination – and affirm dignity and respect for everyone, regardless of sexual orientation or gender identity! https://t.co/4809hXPnmf

100+ people protested outside a flower shop in Ketchikan, Alaska after it refused to sell flowers for a #SameSexWedding. “She responded with a nervous giggle and said ‘Yeah, no. I’m not OK with that, so I won’t be able to help you.'” https://t.co/rvhtlQdSV2 #LGBTQ