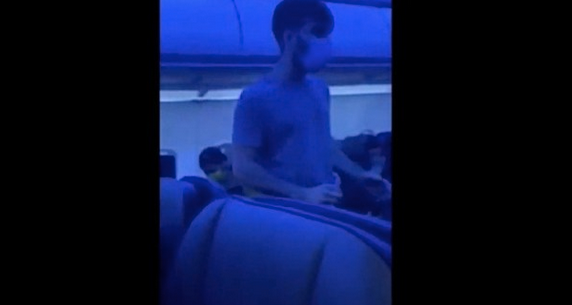 An Alaska Airlines flight was forced to land Saturday evening after a male passenger threatened to kill all other passengers on the plane, airport officials say. Alaska Airlines Flight 422 left from Sea-Tac Airport at 11:10 p.m. en route to Chicago O’Hare, officials with the airline say.

Video of the incident shows the man yelling, “I’m going to kill everybody on this plane. Die in the name of Jesus!” In the video, two passengers are seen quickly taking the man down and telling other passengers it is going to be okay.

On Saturday night, a flight from Seattle-Tacoma to Chicago tested travelers. One of the passengers threatened another death 😧. Fortunately, there was a police officer 👮‍♂️on board who took care of the aggressive traveler along with several others.#alaskaairlines pic.twitter.com/ORieKtcHYV

An Alaska Airlines flight was forced to make an emergency landing after a deranged passenger threatened to kill everyone on it.https://t.co/Tbt0zfGQnM

Previous CA Gov Closes Bars, Restaurants, Gyms, Churches
Next Cop Who Vowed To Shoot Protesters Who Came To His Door Charged With Killing Cop Who Knocked On Door