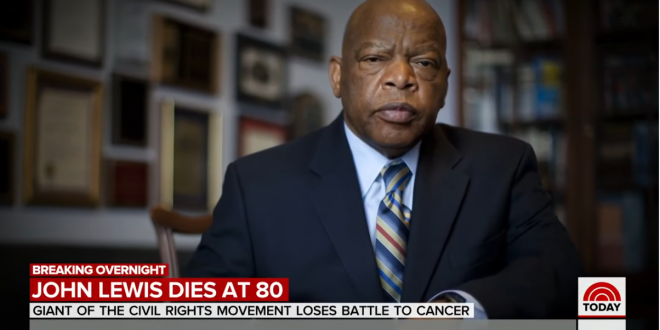 As news of Rep. John Lewis’ death rocked the nation, tributes to the civil rights leader and longtime Georgia politician poured in from activists and politicians alike. Lewis was the son of sharecroppers who survived a brutal beating by police during a landmark 1965 march in Selma, Alabama. He ultimately became a towering figure of the civil rights movement and a longtime US congressman.

You did, indeed, fight the good fight and get into a lot of good trouble.

You served God and humanity well.
Thank you.
Take your rest. #JohnLewis pic.twitter.com/U1cPEwfCGO

John Lewis was an American treasure.

He gave a voice to the voiceless, and he reminded each of us that the most powerful nonviolent tool is the vote.

Our hearts feel empty without our friend, but we find comfort knowing that he is free at last.

Sharing my reflections on the passing of @repjohnlewis. Rest in heavenly peace. #GoodTrouble. pic.twitter.com/jcA6OPm7Eh

John Lewis gave all he had to redeem America’s unmet promise of equality and justice for all, and to create a place for us to build a more perfect union together. In so doing he became the conscience of the nation.

Statement from Jimmy Carter on the passing of John Lewis pic.twitter.com/neoHpc0jBt

.@RepJohnLewis was a titan of the civil rights movement whose goodness, faith and bravery transformed our nation. Every day of his life was dedicated to bringing freedom and justice to all. pic.twitter.com/xMbfAUhLUv

My statement on the passing of Congressman John Lewis: pic.twitter.com/sFuU8cqPc8

John Lewis was a true American hero and the moral compass of our nation. May his courage and conviction live on in all of us as we continue to make good trouble for justice and opportunity.

John Lewis was an icon who fought with every ounce of his being to advance the cause of civil rights for all Americans. I’m devastated for his family, friends, staff—and all those whose lives he touched.

My friend, thank you for showing the world what #GoodTrouble looks like. pic.twitter.com/cvG8nSJCW5

John Lewis was a giant among men. A Civil Rights Icon, an indefatigable champion for justice, and a hell raiser known for making ‘good trouble.’

In mourning his passing, let us aspire to build the nation that Congressman Lewis believed it could be.

May he Rest In Peace. pic.twitter.com/sDJ169T9bE

We have lost a legendary leader, civil rights icon and change agent extraordinaire.

John Lewis altered the course of history and left America a much better place.

Previous Barack Obama Pays Tribute To John Lewis: “He Gave All Of Himself To The Cause Of Freedom And Justice”
Next NYPD Union Boss Appears On Fox With #QAnon Mug