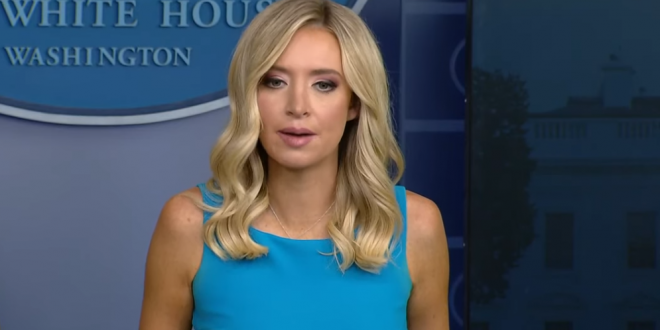 On Fox & Friends Wednesday, McEnany was asked about Trump picking up a conspiracy theory from far-right network OANN that the 75-year-old man was a provocateur who might have “set up” the extent of his injuries. “Could you expand on that?” Brian Kilmeade asked. “Does the president think that this guy is part of Antifa?”

“The president was raising questions based on a report that he saw, questions that need to be asked and every case we can’t jump on one side without looking at all of the facts at play,” McEnany answered.

“This individual has some very questionable tweets, some profanity-laden tweets about police officers. Of course no one condones any sort of violence. We need the appropriate amount of force used in any interaction, but there are a lot of questions in that case.”

White House press secretary: The president was just asking important questions when he accused the assaulted and hospitalized 75-year-old protester of being a fall-faking Antifa electronics-jammer. https://t.co/DkPU1Jtegg

welp, the WH is doubling down

Kilmeade: Trump tweeted the 75-year-old protester might have been an antifa provocateur, can you expand on that?

McEnany: He was raising questions, there are questions that need to be asked in every case …This guy had profanity laden tweets pic.twitter.com/KJUjjbqQxt

.@PressSec doubled down on the President’s tweet of a conspiracy theory about a video of police pushing a 75 year-old protester to the ground in Buffalo last week, saying POTUS was just raising questions about the incident and casting some doubt on the protester’s character.

McEnany on Fox this morning: “The President was raising questions based on a report that he saw. They’re questions that need to be asked, and every case, we can’t jump on one side without looking at all of the facts at play."