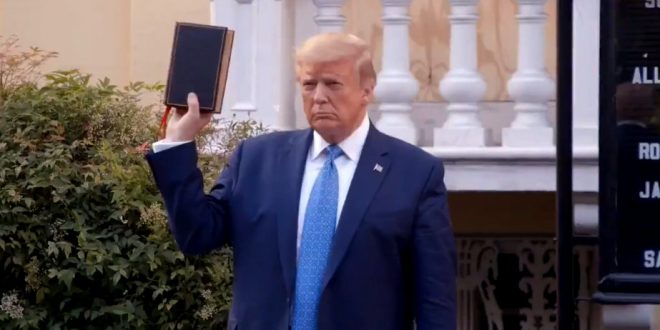 On Monday, police and National Guard troops descended on peaceful protesters in Lafayette Park in order to clear the way for Trump to stroll over to St. John’s Episcopal Church so he could pose with a Bible like it was some award from a group he’d never heard of but was still willing to accept an award from because he likes awards.

Shortly after midnight, The White House posted a surreal propaganda video of the event that featured an inspirational musical score beneath footage of Trump’s stunt, and quicker than you can say “Two Corinthians,” prominent Twitter users took it apart.

I fixed your video for you, the music wasn’t good! pic.twitter.com/PCO5MiLL2y

The Bishop whose church you used without permission for this campaign ad has denounced this, especially Trump’s violently clearing a park full of peaceful protesters and reports. She says: “In no way do we support the President’s incendiary response to a wounded, grieving nation”

This sure feels like a reelection ad to me. Should our police be ordered to use tear gas against peaceful protestors, violating their 1st amendment rights, to help make campaign ads? Something just doesn’t feel right here. Comments? https://t.co/vHpvgc6p3L