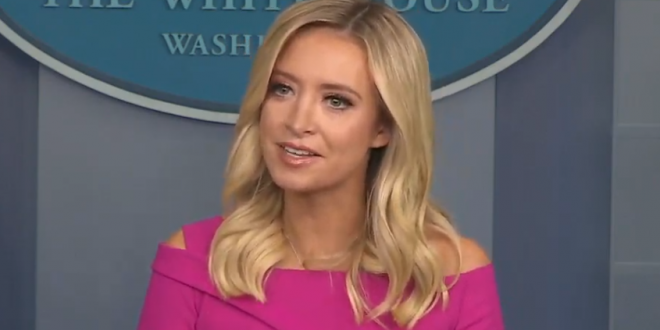 On March 17, Jiang revealed that a White House official called the coronavirus “kung flu” right to her face, but would not name who. Trump adviser Kellyanne Conway then demanded that Jiang share the name with the press pool in skepticism.

“Last July, president Trump declared himself the least recent person there is anywhere in the world,” Jiang asked Monday. “Why does he use racist phrases like ‘Kung flu?’” “The president doesn’t,” McEnany shot back.

White House press secretary Kayleigh McEnany told “Fox & Friends” on Monday that President Trump “was not angry at all” that there were a number of empty seats at his first campaign rally in months. She added that “the president was quite energized” at Saturday’s campaign rally in Tulsa, Okla. “He was in a great mood,” McEnany continued. “It was a great night and there was a lot to celebrate.”

Kayleigh McEnany said in a press conference today that the President never uses phrases like “Kung Flu.” He used it at his rally on Saturday.@PressSec is a liar. #TheyLieYouDie pic.twitter.com/tFYNJTH7cc

McEnany defends Trump saying “Kung Flu” and won’t acknowledge racist nature of remark. “The president is pointing out the origin of the virus is China.” Asked if WH doesn’t believe it’s a racist term: “I think the media is trying to play games with the terminology of this virus.”

.@Yamiche brings up the fact that Kellyanne Conway said back in March that the term “Kung Flu” is racist, asking Kayleigh McEnany if Kellyanne was wrong.

Kayleigh refuses to answer the question and instead turns to OAN for a lifeline. pic.twitter.com/BiQxYWup3e

McEnany said she would never lie from the podium. BUT it’s worth noting she is just about the only person in Trumpworld trying to legitimately claim that Trump was “very pleased” with a rally where the arena was just one-third full… https://t.co/oNjE5LT0e5