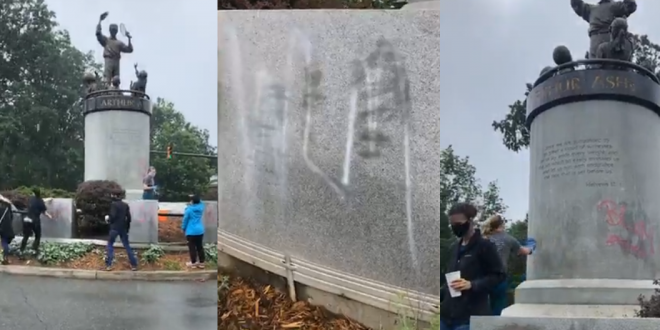 The Richmond statue of Arthur Ashe was vandalized with “white lives matter” graffiti tags late Wednesday morning, setting the community further on edge followings weeks of protest and vandalism throughout the city.

After photos of the vandalism on the statue honoring the civil rights activist and tennis icon were shared to social media earlier in the morning, a Richmond Times-Dispatch reporter saw a man in a blue shirt spraying the phrase on the statue at approximately 11:35 a.m.

At that time, the statute had already been spray painted with “white lives matter” in white paint. The man seen spray painting the Ashe statue Wednesday gave his name as “Everybody,” and said he is a graduate of the Benedictine College Preparatory School who lives in the Richmond area and South Carolina.

Ashe, one of the most successful black tennis players in history, died of AIDS in 1993 after receiving a tainted blood transfusion. Later that year he was posthumously awarded the Presidential Medal of Freedom by Bill Clinton. As you’ll see in the clip below from a local news outlet, someone tried to obscure the graffiti with “BLM.”

Previous Homocon “Walk Away” Leader Claims He Was Ejected From Flight To Trump Rally For Refusing To Wear Mask
Next WH Compares Risk Of COVID At Trump Rally To Getting Hit By Foul Ball At Baseball Games: “That’s Part Of Life”