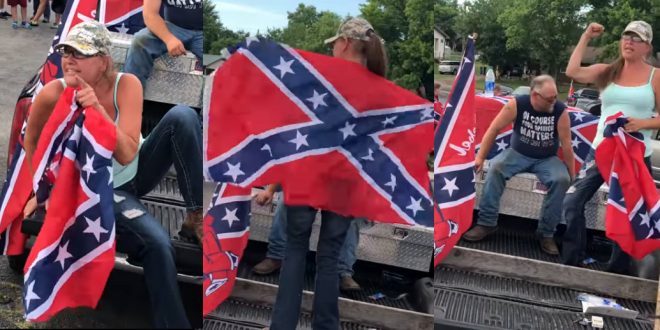 VIRAL VIDEO: Trump Cultist Tells BLM Protesters She Will “Teach My Grandkids To Hate You All, KKK Belief”

A video of a woman who was sitting on the parking lot of Dixie Outfitters Sunday night during a Black Lives Matter protest has gone viral. As of Monday afternoon, the video has more than 100,000 views and was shared more than 3,500 times. On Twitter, the video has been viewed more than 2.4 million times.

In the video, a woman sitting on the tailgate of a truck with a Confederate flag attached and wearing a camouflage Make America Great Again cap gets into a heated confrontation with a Black Lives Matter demonstrator.

The woman, who told the News-Leader her name is Kathy Bennett of Branson, stood up and shouted to the demonstrators, “I will teach my grandkids to hate you all.” Then she said “suck on this” and shrouded herself with a Confederate flag. Bennett then turned around, made a fist and said, “KKK belief.”