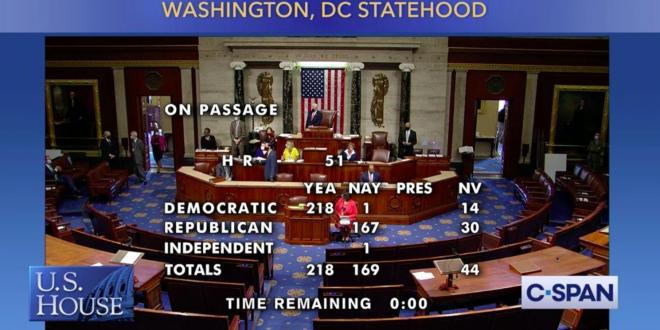 House Democrats approved a bill to admit Washington, DC, as a state on Friday, marking the first time either chamber of Congress has advanced a DC statehood measure.

The rest of the city would become the 51st state, named the Washington, Douglass Commonwealth after abolitionist Frederick Douglass. The bill passed with a vote of 232-180. Rep. Collin Peterson of Minnesota was the only Democrat to join Republicans in voting against it. Independent Rep. Justin Amash of Michigan also voted no.

We just made history! The US House just voted to end a 210-year injustice and to give equal representation to the 700,000 residents of Washington, DC. #DCStatehood #51State pic.twitter.com/GTmi7JrJAc

🚨BREAKING🚨
The House just passed the #DCStatehood bill (#HR51), marking the first time since the creation of the District of Columbia 219 years ago that either chamber of Congress has passed a bill to grant statehood to D.C. residents and, with it, equal citizenship.

If Democrats want to give DC statehood, then it should abide by a few requirements:
→ No sanctuary city status
→ No defunding of police
→ No autonomous zones

Democrats just voted against all of these.

The 700,000 residents of D.C. deserve full representation in our national government.

D.C. residents pay taxes, serve on juries, fight in wars, and work on the frontlines of the COVID-19 pandemic. I was proud to vote today to make #DCStatehood a reality. pic.twitter.com/N53kIVdrL4