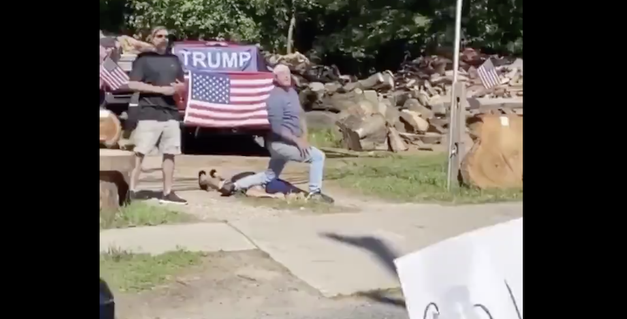 A New Jersey corrections officer has been suspended and a FedEx employee was fired Tuesday after video showed them mocking the death of George Floyd, a black man who died in police custody in Minneapolis.

Footage first surfaced on Monday of the two reenacting Floyd’s death as a crowd of protestors marched in a Black Lives Matter demonstration in Franklin Township, N.J. The video, which quickly went viral on Twitter, showed a white man shouting at protestors as he kneeled on the back of another man’s neck.

“This is what happens,” the man shouted as other men stood in front of trucks adorned with banners supporting President Trump and a sign saying, “All Lives Matter.”

FedEx holds its team members to a high standard of personal conduct, and we do not tolerate the kind of appalling and offensive behavior depicted in this video. The individual involved is no longer employed by FedEx. We stand with those who support justice and equality.