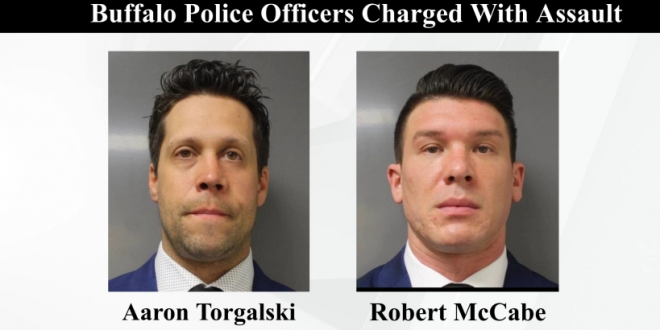 Two suspended Buffalo, New York, police officers pleaded not guilty Saturday to assaulting a 75-year-old man during a protest against racism and police brutality. Both were charged with one count of assault in the second degree and have been released on their own recognizance without bail. They were arraigned via video conference and had the same attorney. The officers, who were with the Police Department’s Emergency Response Team, are scheduled to appear in court again July 20.

The officers turned themselves in Saturday morning, Erie County District Attorney John Flynn said in a news conference after the arraignment. Flynn said he was prepared to charge the officers on Friday, but he “didn’t want to pour gasoline on the fire” after he learned 57 officers resigned from the Emergency Response Team on Friday and “they weren’t going to come last night to protect the city of Buffalo.”

#UPDATE: Cheers erupt as suspended Buffalo police officers Robert McCabe and Aaron Torgalski leave the @DAErieCountyNY office after being arraigned on one count each of second degree assault. @news4buffalo pic.twitter.com/ima8KxyoZP