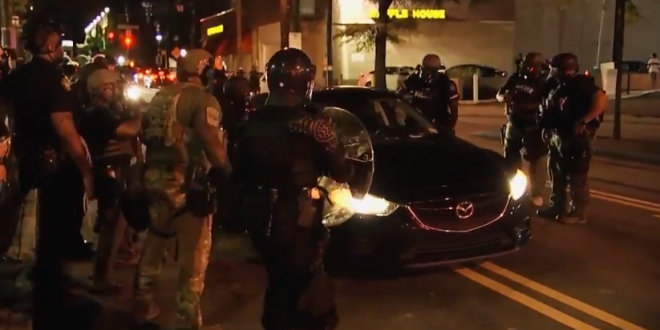 Two Atlanta police officers who tased and pulled two Atlanta University Center students from a car on Saturday night have been terminated. Three other officers were placed on desk duty pending further investigation. Mayor Keisha Lance Bottoms made the announcement during a press conference late on Sunday.

CBS46 cameras were rolling as Messiah Young, 22, and Teniyah Pilgrim, 20, were taken into custody after 9 p.m. Saturday night. Young is a student at Morehouse College, and Pilgrim attends Spelman College.

The couple was leaving the protest at Atlanta’s Centennial Olympic Park in their car at the time. The video shows police smashing the driver’s side window, opening the passenger side door, and tasing the couple before pulling them from the vehicle.

The clip currently has 18 million views.

Messiah Young and Taniyah Pilgrim were returning home when police smashed their car windows, pepper spray and taser the terrified young couple, then drag them out of the car & arrest them.

(I do not have full context.)