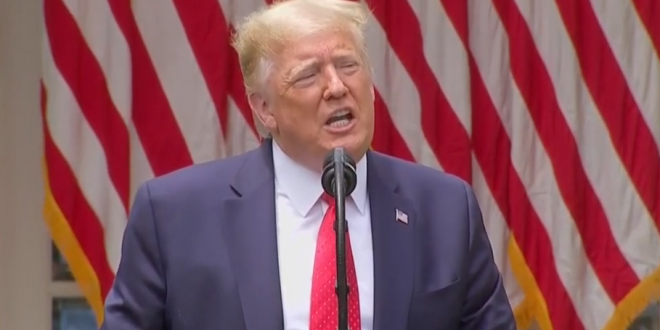 Twitter on Thursday evening took the rare step of appending a warning label to one of President Trump’s tweets after the company determined it violated its policies on manipulated media. The president tweeted a doctored version of a popular video that went viral in 2019, which showed two toddlers, one black and one white, hugging.

In the version Trump shared, the video has been edited with ominous music and a fake CNN headline that says, “Terrified toddler runs from racist baby.” “Racist baby probably a Trump voter,” the headline then says in a subsequent screen.

A spokesperson for CNN responded to Trump’s tweet Thursday night, “CNN did cover this story – but exactly as it happened. Just as CNN has reported your positions on race (and your poll numbers). We’ll continue working with facts and invite you to do the same, rather than tweeting fake videos that exploit innocent children. Be better.”

The video Trump tweeted included a credit to @CarpeDonktum, who regularly publishes memes and parody videos supporting the President. After Trump tweeted the video it quickly went viral, racking up millions of views in less than two hours.

Twitter twice flagged Trump tweets over the past month, enraging the President and his supporters and even prompting the President to sign an executive order targeting social media companies.

CNN did cover this story – exactly as it happened. Just as we reported your positions on race (and poll numbers). We’ll continue working with facts rather than tweeting fake videos that exploit innocent children. We invite you to do the same. Be better. https://t.co/T1nBtejZta

This pathetically lame video confirms my suspicion that all the Republicans with any video skills are Never Trumpers.

Previous CHATTER AWAY: Overnight Open Thread
Next AMC To Reopen Next Month, No Masks Required