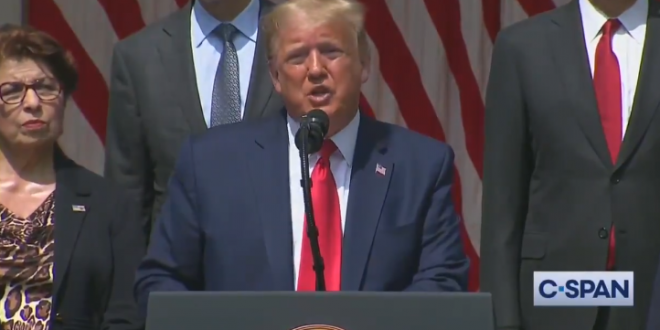 Trump Says George Floyd Would Love Today’s Jobs Numbers: “This Is A Great Day For Him, For Everybody”

Trump is apparently using his press conference to declare both the coronavirus crisis and the George Floyd protests to be over.

However, protests against police brutality are continuing across the country, and Democrats have called for a number of policy changes, including a national ban on chokeholds, that have not been enacted.

Less than 24 hours after George Floyd’s memorial service, Trump called this a “great day” for Floyd and others “in terms of equality.”

“How is this a great day for George Floyd?” I shouted to President Trump, before he turned and exited the Rose Garden without taking a single question. https://t.co/ks60ONgeUn

Imagine being so dense that you would suggest George Floyd was “looking down and saying this is a great thing that’s happening for our country” while peaceful protesters are being beaten and gassed because he was murdered.