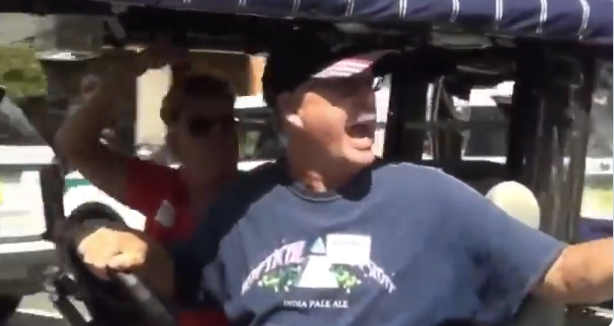 This morning the president of the United States retweeted a video showing protesters clashing with his supporters in The Villages, Florida, a senior citizen enclave that has become infamous in recent years for its almost entirely white and right wing population.

As a parade of golf carts laded with Trump signs passes shouting protesters, the man in the lead cart responds by shouting, “White power!” The man he is targeting reacts with, “There it is, white power.”

Thank you to the great people of The Villages. The Radical Left Do Nothing Democrats will Fall in the Fall. Corrupt Joe is shot. See you soon!!! https://t.co/4Gg1iGOhyG

Jfc I cannot believe he retweeted this. These Trumpers are literally yelling “white power”. Republican senators are tweeting to their sycophants to “fight for the soul of their country”. This is dangerous. They’re trying to start a race war.

The president RTs a video in which a guy driving with Trump 2020 signs shouts “white power” https://t.co/CbyY5vi7kN

President Trump just re-tweeted a video of some of his supporters shouting “white power!” It doesn’t get more explicit than this, folks.

Trump thanks the “great people of The Villages,” while reposting a video of a Trump supporter yelling “White Power.” https://t.co/coezeWU9Np

Trump just thanked people with Trump signs yelling “White Power!” If there was ever doubt about his racist agenda, he’s making it clear. https://t.co/uPUgruSY55

Previous CHATTER AWAY: Overnight Open Thread
Next Trump Denies He Was Told About Bounties On Troops