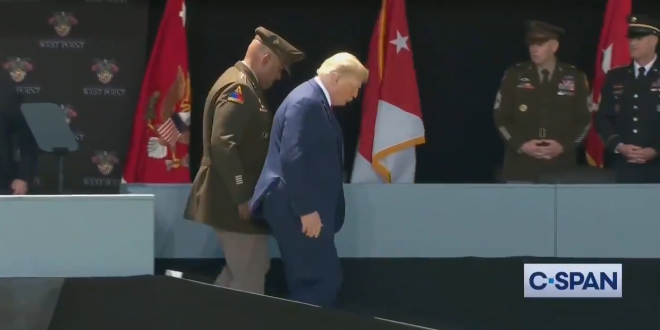 President Trump in a late-night tweet on Saturday defended his slow walk down a “very slippery” ramp after giving the commencement address at West Point, which sparked attention on social media. Video posted to Twitter showed the president walking gingerly down the ramp.

“#TrumpIsUnwell” and “#TRUMPstroke” were among the hashtags trending on Twitter late Saturday and early Sunday.

Graduates at the academy’s campus in upstate New York adhered to social distancing guidelines, underscoring the continued threat of the novel coronavirus throughout the United States. The cadets marched out in masks and removed them upon taking their seats.

The ramp that I descended after my West Point Commencement speech was very long & steep, had no handrail and, most importantly, was very slippery. The last thing I was going to do is “fall” for the Fake News to have fun with. Final ten feet I ran down to level ground. Momentum!

Trump descended a ramp extremely carefully at the end of his West Point speech today pic.twitter.com/uMG3KyB1V1

Previous Gingrich: Biden Win Would End America As We Know It
Next Ex-Liberty University Staffer Ousts GOP US House Rep