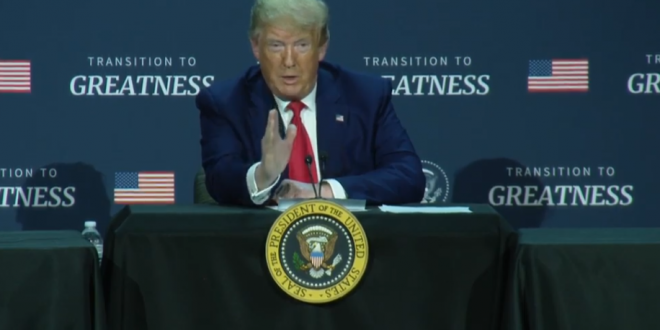 Trump Praises Use Of Tear Gas On Protesters [VIDEO]

President Trump praised the use of tear gas and other force to disperse Minneapolis protesters, calling it a “beautiful scene” and describing the National Guard’s actions “like a knife cutting butter.”

“I’ll never forget. You saw the scene on that road … they were lined up. Man, they just walked straight. And yes, there was some tear gas and probably some other things,” Trump said in opening remarks at a roundtable on policing and race. “And the crowd dispersed and they went through. By the end of that evening, and it was a short evening, everything was fine.”

Trump’s event at a conservative, evangelical and predominantly white church in Dallas on Thursday afternoon came as the White House has yet to announce what new measures it might support in response to the protests against racial injustice that have gripped the nation since the killing of George Floyd by a police officer.

Trump calls the National Guard spraying peaceful protesters with tear gas (and he actually admits here that yes, tear gas was used), was a “beautiful scene.”

President Trump says he is finalizing an executive order that will “encourage” police departments nationwide to have a standard for using “force with compassion” https://t.co/Nj065CIsxp pic.twitter.com/SrA8yMnsvA